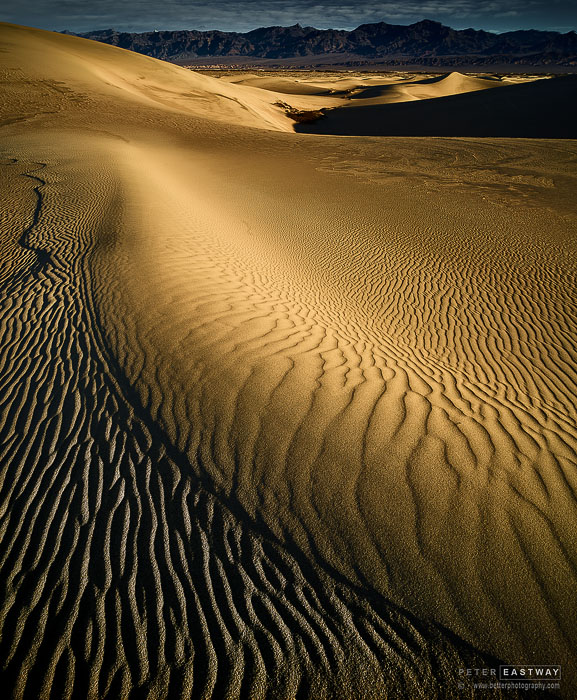 When I think of the sand dunes at Death Valley, I think of Edward Weston's black and white print. It's only one of many, but I can remember thinking he had cropped it a little tightly, but I always wondered if it was cropped that way on his print, or just in the book where I first saw it.

I think I must have visited the dunes a dozen times, maybe more, and each time I get there, I think to myself that I really have photographed it a lot and surely I'm done. But it's never the case. You're always in a different location within the dunes (even though they don't move much from year to year), the light is from a slightly different angle - and then there's the weather.

The afternoon we arrived there was a fierce wind. We watched people getting sandblasted as they walked across the dunes and if you went out there, changing lenses would not have been a good idea! Fortunately, it had been raining earlier in the day, so there wasn't as much sand being picked up as there could have been. We all mentally prayed the wind dropped over night. And it did.

The following morning was different, not just because most of the footprints had been blown away, but because the dunes were still wet underneath, adding an interesting marbling effect. They were a lot easier to walk on too! Every time I visit the dunes at Stovepipe Wells, there's always something a little different.

This is a focus stack, using three images processed in Capture One, then output as 16-bit TIFFs and stacked together using Helicon Focus (Method C). I'm feeling rather proud of myself as I've processed over 50 shots from our USA photo tour which are currently being displayed daily on Instagram (check them out - follow petereastway). I hope you like them!