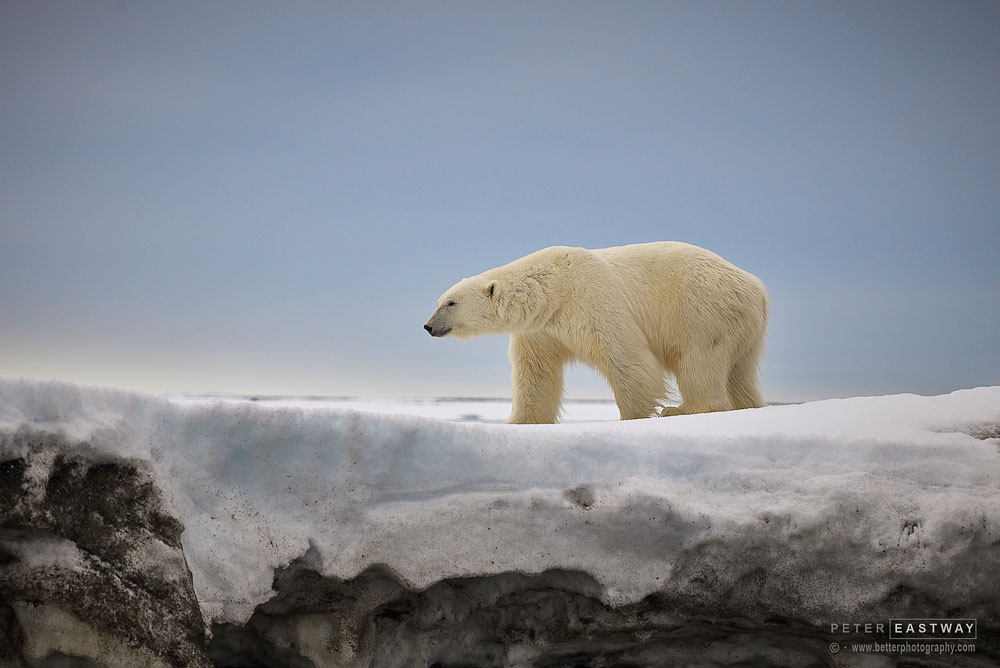 If you had to choose a position from which to photograph a polar bear, it would be down low (rather than from up high looking down, so you feel the power of the animal), and with an uncluttered background (so the polar bear stands out). So you can imagine my excitement when this polar bear decided to go for a stroll along the edge of Storoya, a tiny island in the Svalbard Archipeligo.

I've recently returned from two trips, the first in Svalbard. I travelled with Kevin Raber from Luminous Landscape and a group of keen photographers, some of who outgunned me with their high end telephotos - 500mm f4 and 400mm f2.8 optics were also trained on the above polar bear, but I did have the advantage of shooting it with two cameras.

This image is shot with the Phase One XF and the 100MP Trichromatic back, using a Schneider Kreuznach 240mm lens. It's not the ultimate wildlife camera outfit because the telephoto isn't long enough and the frame rate is too slow, but the shots that I did get are AMAZING. There is no comparing a Phase One file, especially on the new Trichromatic back and I'm loving the way I only need to caress the colour saturation in Capture One to get a colour palette that I'm in love with! Yes, I'm a convert. And yes, all hand-held from a zodiac (as you can see in the photo at the end of the article).

And the other camera? A much more sensible rig: the new Fujifilm X-H1 with its 100-400mm telephoto. Fast frame rate, 24-megapixels, image stabilisation, long telephoto and lots of bells and whistles. No, the results aren't as sharp as my Phase One files, but if you were comparing images on a website, a little bit of clarity and structure in Capture One creates incredibly crisp and impressive photos from the Fujifilm files. However, what really struck me as being quite amazing was the image stabilisation - I was able to shoot incredibly steady video at 400mm from a moving zodiac. It's not locked off like you'd expect from a tripod, but when the foreground is tracking along with the lumbering polar bear, it looks really cool!

To see my novice video efforts from Svalbard, shot with the Fujifilm X-H1 and a GoPro, search Youtube for 'Eastway' and 'Svalbard' or click this link: https://youtu.be/69rP-qnNHjg

And below, check out the photo of the zodiac with the polar bear in the background! It was a great photo opp!