Swirling The Sheep - Clockwise or Anti-clockwise? 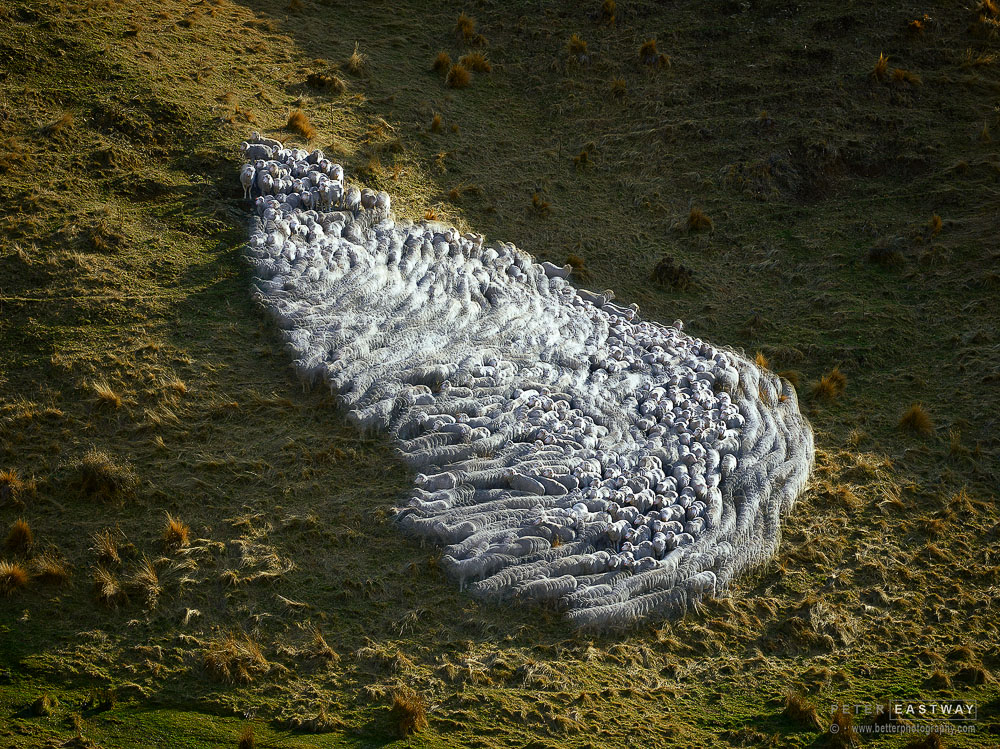 When the dogs move a mob of sheep around a hill, do the sheep turn clockwise or anti-clockwise? Unlike water in a sink, this isn't a trick question and of course, it depends on what the farmer (or pastoralist) wants to do. While I like long exposures of moving subjects, I confess that the shorter longer exposures are more varied and interesting than the longer longer exposures, but setting the appropriate shutter speed or time is a fraught business because it all depends on the sheep and how fast they decide to move - or how fast the dogs decide the sheep should move.

For we photographers at Middlehurst, we just turn up to the location and point our cameras towards the sheep. We've photographed the mobs in a number of different locations, but this spot is particularly good because there are lots of folds in the landscape and we have a high vantage point.

However, behind the scenes there's a lot of things going on.

To begin with, Middlehurst is a 16,000 hectare property and while there are 10-20,000 sheep, they might not be within striking distance of our cameras. So when Tony and I arrive at Middlehurst, Willy and Sue are already planning how they will move some of their sheep around to a nearby paddock. On the day, the sheep have to be herded into position and usually this is Sue and Tony's job. Regular readers may remember that 'Tony' is Sue's horse, not to be confused with Tony the photographer.

An hour or more before the shoot, Sue will grab Tony and her dogs and begin rounding up the sheep. She keeps them hidden behind a hill while we set up our cameras and when we're ready (we're using two-way radios), the sheep are pushed over the crest and into view. No matter how many times I photograph sheep like this, I find it mesmerising the way they move as a relatively integrated unit around the landscape.

When it comes to blurring the sheep, this is a matter of neutral density filters and exposures of 1 to 10 seconds. Generally I find two to four seconds best. I like to shoot with a slightly wider lens which allows for the sheep to move around the scene, but this time I used a telephoto and found a few shots worked really well when the sheep were spilling into or out of the frame. The photo above is well-contained and is a work-in-progress. My next step will be to use some other exposures that have Sue, the horse and the dogs in the frame - but frozen with faster shutter speeds.

But that will be for another day!

Long exposures are usually thought of as the preserve of seascape and landscape photographers shooting clouds and moving water, but I have seen the technique applied to people as well - a book from my shelf, Alexey Titarenko Photographs has some wonderful examples of crowds moving around St. Petersburg in Russia. So why not animals? Maybe this is something I'll try in Africa in 2024 (photo tour details available soon).