The Nuance of the Polar Bear's Walk 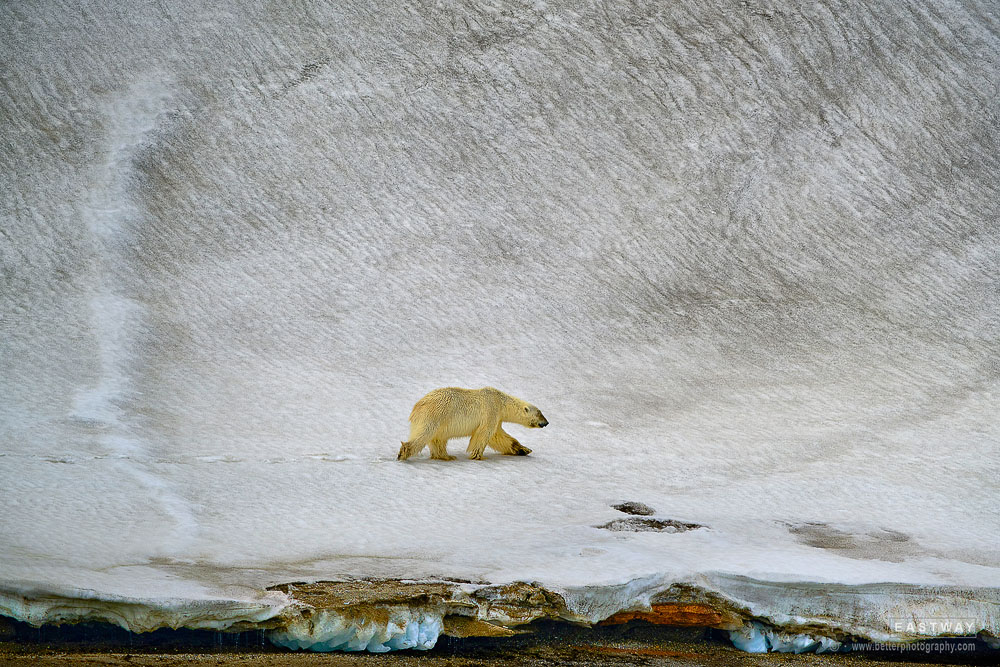 When it comes to photographing wildlife, I think most of us are much the same. As soon as we find our target, we shoot. Doesn't matter what's behind it, what it's doing, or how it's framed, we take a photo. Then, with a safety shot (no matter how inferior) under our belt, we start to shoot a few more, looking for a better angle, a better pose or a superior background. I took hundreds of shots of this bear!

On this occasion, the polar bear was walking along a straight stretch of sandy coast, littered with icebergs and ice drifts. Polar bears are not slow. We estimated this one was ambling along at around 6 kph, which explains how easy it could be for you to find yourself face-to-face with one after a few hours on shore. He (or she) mightn't be nearby when you land, but that doesn't mean he (or she) couldn't arrive very soon! And that's why we have guides and lookouts for all Arctic landings!

Keeping our distance in the zodiac as required by the tourism regulations in Svalbard meant I was a little limited in my angle. Using a 200mm lens (equivalent to a 300mm on a full-frame sensor), the polar bear was quite small in the frame, but I liked that because it meant the surrounding landscape held equal importance. I had a 1.4x converter with me, but I found the angle was a little tight. I had plenty of time to experiment as we tracked this bear for maybe 20 minutes or more. And while he appeared to notice us from time to time, it was pretty clear he was intent on something else and we weren't worth worrying about.

So out of the hundreds I shot, why this one? I like it! I like the snow drift behind - a bit like a backdrop in a studio. I also like the foreground where the waves have washed the snow away, revealing a rocky shoreline. And I like the positioning of the polar bear's legs. Although I could have simply kept my finger pressed on the shutter button and fired away, I found it easier to watch the polar bear and press the shutter as he extended his front leg. After a kilometre or so of practice, I think I was quite good at it in the end!